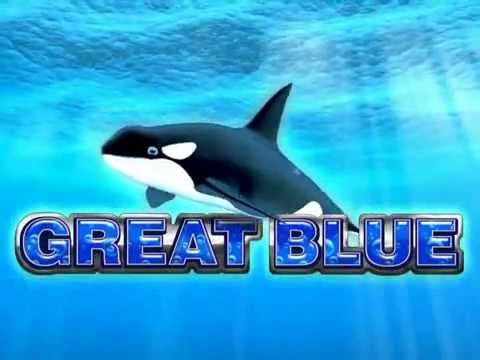 Great Blue is a high quality online video slot game powered by Playtech. The game itself has an underwater theme and includes images of various aquatic animals frolicking around in their natural habitat. The backdrop to the game is a view of the vast empty ocean with bubbles rising up behind the reels. The graphics and animation give the game the game an extra dimension with each symbol becoming animated when used in a winning combination. In the background, the sound of bubbles can be heard with a flurry of music whenever the reels slide into position.

When it comes to the slot setup, Great Blue utilises the now standard slot setup of 5 spinning reels with 25 paylines in which players can form a winning combination. On the reels, players will find a host of aquatic creatures in all shapes and sizes. The highest paying symbols in this game include the shark, the turtle, the seahorse, the starfish and the angelfish. For the lower paying symbols, Playtech have used the high card symbols from nine to ace. The high card symbols have been designed to blend into the underwater theme of the game.

The wild symbol in Great Blue is also the highest paying symbol of the game. If players are lucky enough to land all 5 killer whale wild symbols across the reels, they will trigger the slot jackpot of 10 000 coins. The game also includes scatter symbols which is played by the pearl symbol. The scatter symbol is the key to triggering the free spin bonus round. To trigger the free spin round, players must land 3 or more scatter symbols anywhere on the reels. Once triggered, players will automatically get a minimum of 8 free spins with a 2x multiplier.

In Great Blue, the free spin round pops up a second screen like some offers at online betting sites for USA punters. Here players must choose two clam shells out of a set of five. One of the shells determines the number of free spins awarded, the second shell determines the multiplier for the free spins. The maximum number of free spins that can be won is 33 and the highest multiplier that can be awarded is 15x. If players land 3 or more scatter symbols in the free spin round, 15 more free spins will be awarded with the same multiplier as the first trigger. For players who want to increase their winnings, the game also includes a gamble feature. In the gamble feature players can double their winnings by correctly guessing the colour of the next playing card drawn from a shuffled pack.